I am so proud to be an affiliate of Career Digital, a new online site featuring "Career Insights and Advice," a comprehensive compilation of blog posts by today's careers experts. Offering all of the important categories for

job seekers and careerists, this site will help you conduct your job search and manage your career.

With navigation ease, you may search by pertinent topic and get linked to careers experts blogs. Headlines clue you in to the information each blog post presents. No need to look further – now you may find answers to all you career questions in one place.

Career Digital launches today! Do yourself a favor and check it out!

You may even search the site from this blog! Just scroll down a bit.

Wishing you career success in 2011!

#Jobseekers are always asking me, "How do I use Twitter for my job search?" Some have a difficult time believing that a staggering number of jobs are posted on Twitter every month. In fact, some career experts claim that Twitter is the fastest-growing opportunity for employment, even ranked as high as #1. TweetMyJobs.com has over a million jobs tweeted each month (enough to make a Monster tremble?).

OK, so are you a believer yet? I can hear the moans now, "I don't have time to do Twitter." Or maybe you think LinkedIn or Facebook is enough in the way of social media tools for you. But wait! Aren't you still job searching? Maybe one more tool could really help? Consider this: Twitter is the "barrier buster." It's the only social media tool that doesn't require permission to network. There are no gatekeepers! On Twitter, you can as easily read the Twitter stream of a CEO as that of a college student. And connecting with anyone you want to follow is easier, too!

Twitter is really one of the fastest ways to find others who share common interests – to exchange job search practices, professional ideas, and resources for your job search.

With a vision ahead of the curve, career management authors Susan Britton Whitcomb @SusanWhitcomb, Chandlee Bryan @chandlee, and Deb Dib @CEOCoach have collaborated to publish The Twitter Job Search Guide – to be released in March (reserve your copy now!). Their book is a practical tutorial in Twitter tools and best practices including pioneering Twitter-inspired techniques with step-to-step guides to:

>>> Developing your "Brand to Land Plan"

This book includes more than 100 contributors: 13 successful job seekers, plus an all-star cast of respected authors, recruiters, and career management experts (including me – @KCCareerCoach).

If you're not using Twitter, you're missing out on a cutting-edge job search method. Take a chance – dip your big toe into the pool – you won't drown, I promise. Nothing to fear here!

Wishing you career success in 2010!

While cleaning old records from my computer during the holiday season, I came across a commentary I had written for my Abilities Enhanced company newsletter in 2003. Since the story is still relevant for today's job seeker, I'm sharing it again today:

"Last week I attended a networking event where the program was presented by an executive coach. The room held about 50 attendees, most of them working in businesses that I believe this coach wanted to target. The presentation focused on how coaching can best be used to improve company cultures when the CEO is the first person to buy into the culture change.

"Prior to the start of his presentation, this coach set out to "work the room," meeting and greeting many of the attendees. He was "all smiles" when he approached me, but as soon as he learned that I was just another coach, his eyes began to wander as he surveyed the room for a "hotter" prospect. You see, he perceived me not as a potential buyer of his services. His disconnect with me was obvious and I wondered about his authenticity, despite the fact that he had a successful practice and an important message to share.

"What is MY message here? Expert networkers know that most important contacts are only a few degrees removed from any person you meet. If the coach in this situation had taken a little more time with me, he would have learned that as a career coach I have access to business leaders in many different industries. Since my practice focuses mainly on individuals, not organizations, I could have probably been a great referral source to him. Instead, this coach was more interested in obtaining immediate gratification than building a referral network.

"As job seekers, rarely will you connect at any one event with a primary contact, that is, anyone who can hire you or even introduce you to a hiring authority. Networking is a process that takes time before you reap rewards. Get acquainted with as many people as possible. A major part of the process is "giving before taking," what I call the Golden Rule of Networking. Carry no self-serving expectations to a networking event. Avoid networking bloopers. Networking done right is a time-consuming process, a process paying high dividends when approached from a place of authenticity. Approach networking with the attitude, "It's all about them." When you are curious and show your interest in others, your circle of influence expands. Eventually, the leads you need will come your way."

Wishing you much career success in 2010! 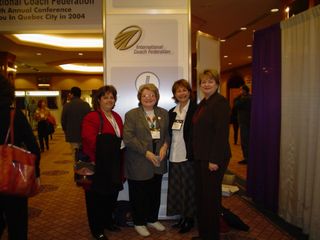 It's that time again – the end of one year and the beginning of another. Many make New Year's Resolutions fully intending to keep them, but seldom do. Whether it's to lose weight, save more money, be nicer to in-laws, spend more time with your kids — speaking your intention is only the initial step to success. Creating a plan and then working it will bring you much closer.

This is particularly true when it comes to your job search. If you've been out of work or laid off for any amount of time, overwhelm and apathy may have set in. Yes, it's difficult – very difficult – to keep going. Rejection is the most painful emotion to feel, even when you try so hard not to take it personally. Now, more than ever, you need a job search buddy to keep you motivated and moving forward.

Hopefully, you took some time off during the holidays to focus on YOU and your self-care. You'll need every ounce of this renewable energy as you renew your job search in January.

To help boost your job search as we enter 2010, I've made a list of recommended New Year's Resolutions. Not in any particular order, each offers its own importance to assist you.

While writing these resolutions, I see that there are so many more that could be added. What are your comments? What do you consider to be the most important New Year's Resolutions for job seekers?

Wishing You Job Search Success and a Happy New Year!