Astronaut Neil Armstrong died last week. He will always be remembered as the first man to walk on the moon, saying as he did it for all posterity, "One small step for man; one giant leap for mankind." I vividly 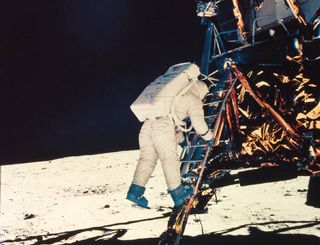 recall that day in July 1969, as do most of the Boomer generation. We were glued in awe to our TVs, some of us still watching black and white sets. What a day! If a man could walk on the moon, then anything was possible! The event filled me with hope and anticipation as I looked forward to my first year in college and the launch of my career. As most high school graduates then, and even many today, I had no inkling that my first career wouldn't be my only career. It's taken years for me to comprehend that career paths are meant to change.

Interestingly, career change correlates to space exploration. Like for those involved with many of NASA's projects, we have to patiently persevere and let the change process evolve, accepting things that can make us say in doubt, "Yeah, but…" If we try to rush it, chances are we'll fall into a career by default instead of by choice. Many names of NASA's space vehicles iterate major steps of career change, the most current being Curiosity.

Forty years after the first moon landing, NASA continues space exploration – this time with a robot on Mars. Launched in November 2011, the Mars Rover, "Curiosity," landed perfectly on the "red planet" on August 5, 2012. Just imagine it, over eight months to travel from Earth to Mars. Once again, I was awestruck at the grandeur of this event that led me to reminisce about the moon landing.

In changing careers, eight months isn't an outlandish time. Some career changers can accomplish the process in as little as three months, while for others, it might take up to a year. Influencing the time factor are one's commitment to the process and the actual hours available to invest. Most of my career change clients reach their goals in three to four months with my career coaching assistance, motivating and cheering them along.

The first U.S. satellite, "Explorer 1," launched in 1958 in response to the Soviet Union's Sputnik. Look how far the U.S. went in space exploration in the eleven years before man's walk on the moon!

In career change, curiosity leads to exploration of options and possibilities. Questions get asked and with the right focus, answers are found. Once you see a few career possibilities, it's time to explore their viability for you. At this stage, the career change process involves a lot of research, talking to people who actually work in jobs that you are considering for yourself. Consider the information you receive; what matches your life's purpose and your core values?

In the 1990s, NASA's space shuttle, "Discovery," busily carried communication satellites to various space destinations to facilitate man's deeper exploration of the space frontier. This exploration led to many discoveries that contributed to more than the just the satisfaction of man's curiosity. Scientific discoveries built on each other, paving the path for greater things to come.

As you choose a new career following your research and testing, I hope you accept that this career may not be your last. Most people will change careers several times in their life. Instead of looking at it as your final career, do the mapping to build on this career so it can lead you to even bigger and better career opportunities.

Just as the NASA space program has endured major budget cuts and accepted private industry into the realm of space exploration, periodic layoffs will occur in the workforce and careers will continue to evolve or become extinct. (Does anybody remember a keypunch operator?) One thing is true about change of all kinds – it happens – change is a constant of life. When you are able to embrace change and rebound from it in your career, you will be better prepared for whatever the future may hold for you. Parts of the career change process you can direct, but there is plenty beyond your control.

Wishing you career success in 2012!